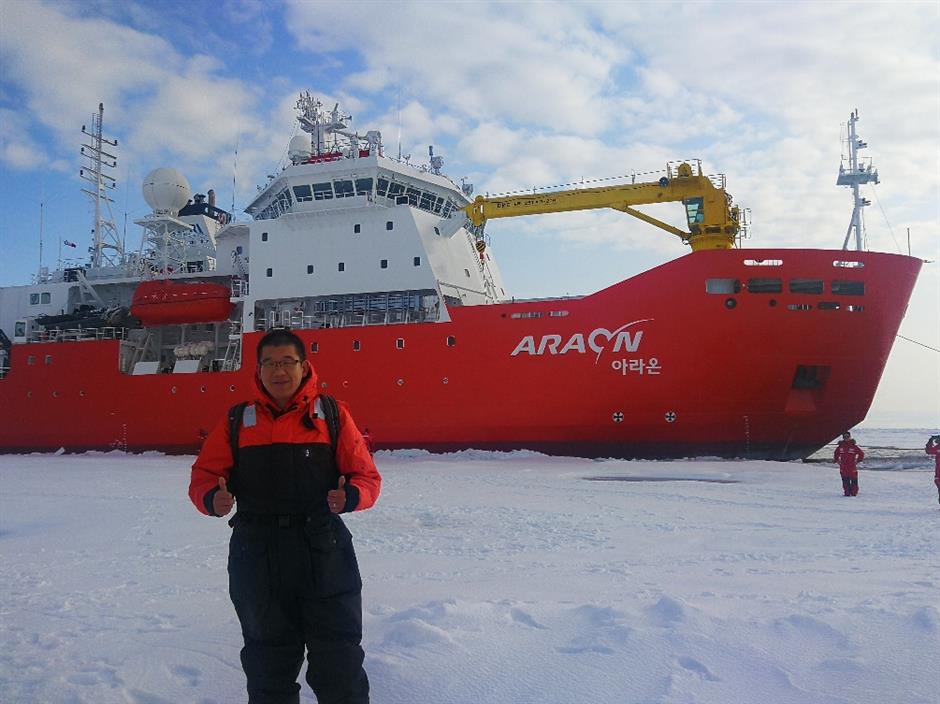 A researcher from Fudan University has returned from a 53-day scientific expedition to the Arctic. This was the first time that a member of the university has participated in an international scientific voyage to the North Pole.

Zhang Peng, a post-doctoral researcher at Fudan’s Institute of Atmospheric Sciences, developed his interest in the Arctic while researching the tropical Pacific. Zhang found that equator studies were not sufficient to explain disastrous weather patterns, and research into middle- and high-latitude regions, especially the Arctic, could fill the gap.

To test his theory, Zhang boarded the South Korean icebreaker Araon with fellow researchers from South Korea, Russia, the US, the UK, France, Italy, Croatia and India. They studied the atmosphere, marine environment and geologic changes in the Arctic Ocean. They also collected information and samples of marine creatures, chemicals and minerals.

“It was my first time in the Arctic,” he said. “I felt that nature was so great, while human beings were so small against the endless glaciers.”

Zhang’s task was to observe the atmosphere over the Arctic. Every six hours, he flew a balloon with sensors to collect information such as temperature, pressure, humidity, wind speed and direction. He flew more than 150 balloons in total, and his data has helped fill gaps in scientific knowledge about the region's climate.

Of course, the same Arctic conditions did not make his task easy.

“When we were near the shore, the boat could be very jolty and it could be dangerous, especially in the evening,” he said. “I had to walk from one end to the other on the deck alone in darkness while the boat was jolting. I was nervous at the beginning. I kept telling myself that it was for science and I have to overcome the challenges.”

To make sure each balloon flew successfully, he usually had to hold it for one and a half hours before wind conditions allowed it to fly stably. What's more, he was not able to sleep continuously for more than six hours during the journey.

Despite the hardship, it seems that his efforts have paid off. The information he collected will support the development of Arctic climate models and analysis of extreme weather.

“But it’s just the beginning. Information collection is a long-term task and we still have a lot to do,” he said.

Zhang said international cooperation in Arctic research is important to confront atmospheric warming, deglaciation and an increase in Arctic storms.

“The most obvious advantage of cooperation is to share resources,” he said. “Development of technology is supported by large numbers of experiments, which require huge investments of capital and human effort. International cooperation can share resources and information and reduce the burden on single nations.”

“Scientific research should face the world and solve problems faced by all humanity,” he said.

The Institute of Atmospheric Sciences at Fudan has organized several international seminars since it was established four years ago. These also helped make Zhang's journey to the North Pole possible. It has further launched cooperations with institutes in Germany, Italy, the US and the UK to carry out joint research, educational visits and talent development. 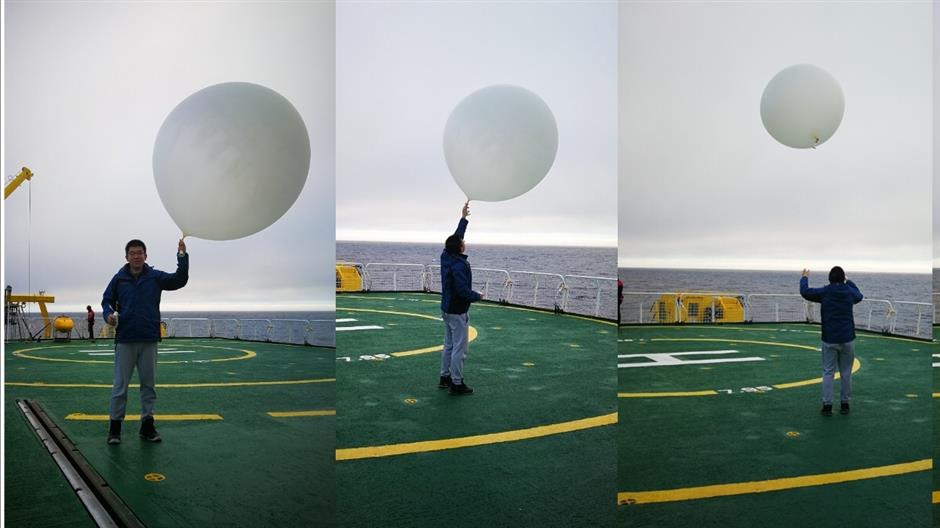 Zhang Peng floats a balloon on deck of the Araon to collect atmospheric information.